On behalf of MP Yvonne Jones, NLOWE members are invited to celebrate women in leadership at her upcoming Gala event, at 25% off.

2021-2 marked 100 years of women in Canadian politics! On top of that, 2021 was a huge year in overall gains in political diversity in NL. We had several elections at ALL levels of government, in which Equal Voice NL played a major role. Ultimately, we saw the highest and most diverse representation of women and gender diverse individuals running in history, at all levels of government.

Additionally, it also marks 25 years in office for MP Yvonne Jones, who has served at municipal, provincial AND federal levels of public office. Yvonne happens to be the first:

While Yvonne is a member of the Liberal party, she wants to celebrate 25 years by supporting ALL future women and gender diverse leaders in Newfoundland and Labrador, no matter what political party or level of government they are affiliated with. To say we are honoured to be chosen as a beneficiary of the opportunity is an understatement!

What better way to continue the recent International Women’s Day festivities and show NL that you are an ally to women and gender diverse individuals seeking political leadership in our province, than to be part of this event?

Take your chances on…

The silent auction will be open to early ticket holders a week in advance, with the final opportunity to bid, during the night of. 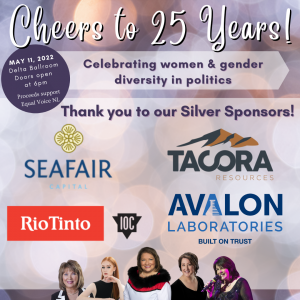 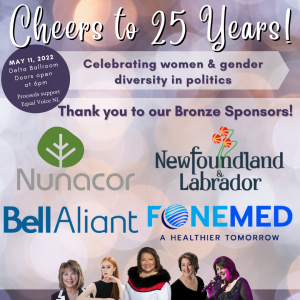 In Support of Equal Voice NL

Equal Voice NL (EVNL) is a local multi-partisan non-profit (not charitable entity) that helps get more women and gender diverse individuals into positions of leadership and all levels of public office, including Indigenous band leadership.

*Attendees must be double vaccinated.
No refunds.